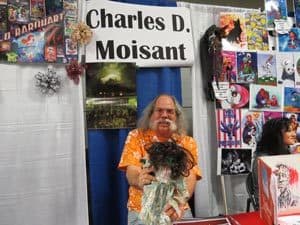 Charles D. Moisant, is a comic book artist, writer, and the creative director of Silver Phoenix Entertainment (a 100% female owned company). Charles has been publishing comic books since 1991, starting with Kremin. Silver Phoenix Entertainment works with many artists, printing comic titles like Myth Told Tales by Robert Asprin and Jody Lynn Nye, Mystery Manor Haunted Theater, and Whispers from the Void. Charles is also known for his Roller Derby Drama, which is loosely based on the Chicago Outfit Roller Derby Team. Charles can usually be found on his roller skates at Silver Phoenix Entertainment promoting some of the newer titles such as ‘Whispers from The Void’ where all monsters are reflections of the Seven Deadly Sins. Philo Barnhart is drawing the second issue. Some of his works currently in production include ‘Zombie Annihilation’, where Doctor Zarvin is working with local heroes from Chicago to save the world from zombies; ‘Danni and Dayna in Dino World’ in which two Woman: IDA DANNI, a modern day military refueling pilot, and Dayna Onli, an African-American woman from Chicago 1902, are trapped 65 million years ago. Working against them are intelligent dinosaurs, lizard people, and the Atlantians a space-faring race who are stealing the world’s only major resource: Magik; and ‘Thunder World’ a story about three giant robots and a giant monster learning how to work with each other and saving the world, which is being written by him and Doug Rice of Dynamo Joe.

SILVER PHOENIX ENTERTAINMENT TO RELEASE HISTORY OF THE POLICE

“The Most Important Comic You Won’t Be Able To Buy”

(OAK PARK, ILLINOIS)  Comics publisher Charles D. Moisant announced his plans to release The History of the Police, the first in a series of comic publications that detail the history of local law enforcement from the Nineteenth Century to the present.  The proposed graphic series is produced with the cooperation of Sgt. Joseph Fitzgerald, Phd., of the Berwyn (IL) Police Department, novelist Brian K. Morris, and interior artist Jeffrey Moy.

“The story will be told,” Moisant said, “through the eyes of a multi-cultural immigrant family.  We recognize that the history of law enforcement is riddled with unfortunate incidents of violent suppression and corruption.  But the majority of police have always been hard-working men and women who want to protect and serve humanity.  That is who we celebrate with this comic book.”

The primary goal of the comic is to serve as a tool to create a dialogue between the Police and the civilian population.  To this end, Moisant intends to distribute at least one million copies of the comic book to schools, libraries, prisons, and to every police station that would like a copy.  The first wave of this distribution will occur on Free Comic Book Day on May X, 2017, thanks to Diamond Distribution, the largest comic book distributor in North America, following a brief crowdfunding campaign.

Planned sequels to the first issue, entitled “Look Behind the Badge,” include stories that deal with civil liberties in a post-Miranda Ruling country and how law enforcement operates after 9-11.  Moisant says, “I’m proud to help create a comic book that could promote a greater understanding of the Police in the communities they serve.  I’m further gratified to be able to get this information  into the hands that can use it the most at no cost to them.  Besides, it’s a good story, one worth telling.”

SILVER PHOENIX ENTERPRISES is an Oak Park, Illinois comic book publisher, responsible for publications as diverse as a history of Oak Park, horror stories based on Bachelor’s Grove Cemetery (“The Most Haunted Cemetery In America”), as well as a local Roller Derby team, real life Goth horror illusionist Master Ron Fitzgerald as well as Kadrolsha Ona, The Queen of the Paranormal and an upcoming art book by animator Philo Barnhart entitled I WANNA SEE!  Silver Phoenix also publishes the authorized continuation of the MythAdventures series by Robert Lynn Asprin and Jodi Lynn Nye.